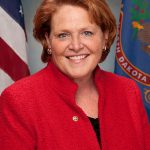 On June 10, 2015, the U.S. Senate Committee on Indian Affairs held an oversight hearing “Addressing the Need for Victim Services in Indian Country.” We agree ALL assault victims in the U.S need help, however we disagree the solution is more funding to tribes.

The adage—the definition of insanity is doing the same thing over and over and expecting different results applies. Crime and corruption thrive with funding and lack of accountability.

1) One rape or child sexual abuse reported every other day on some reservations.

2) Violence accounts for 75% of the deaths of Indian children between 12 and 20.

3) Many leaders/social workers contribute to the abuse

Senator Heitkamp says she is “horrified”—though she’s been told numerous times over years and admits she saw the same stats in the 90s as AG. Her solution: additional funding to tribal governments.

The Senate Committee and BIA have long been aware of well-documented and rampant sexual abuse and youth suicide on reservations. Yet, Senator Heitkamp claims we must figure out why NA children are disproportionately placed in foster care.

Rampant reservation crime thrives with ‘tribal sovereignty.’ Many CAICW members abandoned rez life because of crime and corruption. According to the U.S. census 75% of tribal members do NOT live in Indian Country. Despite claims of tribal leaders, many reject their version of what’s culturally relevant and necessary.

Despite the mass exodus from the rez, Federal government continues to back tribal leaders who claim to speak for everyone, and supports tribal sovereignty at all costs —particularly the cost of our children.

Insist politicians put children first. Tribal “leaders” do NOT speak or know what is best for everyone of heritage. Handing additional funding and control to corrupt tribal leaders IS NOT the best way to help victims.