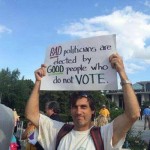 ‘Dakotans for Honesty in Politics’ support campaign finance laws that are equally enforced for all individuals and corporations, no matter race, religion, ethnic background, ideology, or political affiliation.

Elected officials owe allegiance to those whom they were elected to serve.

We encourage Congress to change the make-up of the Federal Elections Commission to include non-partisan representation.