Government » Mayor Villaraigosa; Who are the Racists? 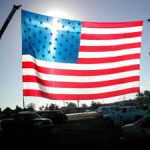 Dear Sir;
While I respect the concern you have regarding racial profiling, I believe that the Law Enforcement Officers of Arizona are professionals.

Many of us in the north are appalled that our southern neighbors have been forced by the federal government to live with violent drug runners racing through their property.  I can’t imagine how frightening that must be.  The fact that a rancher was murdered last month while minding his business, driving on his own land, doesn’t seem to bother the White House at all.

What is our federal government there for, if not to organize and protect our borders?

Sir, the only ones that I see making this a racial issue are the ones that are calling Arizonans racist.

Yes, the law was written because Latinos from Mexico – impoverished families as well as gang members and drug runners – have been illegally crossing the border in greater and greater numbers and with that much hurt has come to Arizona.

But Arizona law enforcement personnel are not idiots. They aren’t the racist rednecks various mayors and pandering politicians from the left have accused them of being.  They are, believe it or not, trained professionals.  I suspect that most have arrested criminals of every persuasion in the past and they expect to do so in the future. While jerks exist in any and every group, (including among White House Staffers) I doubt Arizona policemen intend to eyeball only Latinos for suspicious activity and arrest, and let everyone else go on about their crimes.

The first job of the Police officer, according to SB 1070, is to be about fighting crime and catching law breakers.  That is the number one thing that the Police are supposed to be looking for. Illegal presence in the United States is a secondary factor, and deporting law breakers because they are here illegally is simply common sense.

If a neighbor kid comes into my house and steals something off my dresser…no matter what his heritage is, I’m gonna kick him out and tell him not to come back. (I’ve done the “forgive – let’s talk about this” route before. Forget it.)

Further, it is extremely short sighted to act as if the need for a secure border and strict laws is only about Latinos.

An alert went out this week for someone from Somalia – not a Latino – that is/was attempting to cross the southern Border to commit terrorism.  It has also been known for quite awhile that Al-Qaeda has been recruiting Caucasians in Britain to commit terrorist acts.  In 2008, a Scotland paper wrote,

So let’s get real.  The War on Drugs isn’t our only border concern; there is also a War on Terror.  We can’t play games with our border, no matter who feels offended and pouts.  This is about crime, not race.  Any time anyone crosses the border to stay in the United States without permission, it is a crime.

Every state needs to adopt an Arizona type law.  Why should I be afraid of it?   The police already always ask for my ID every time they stop me for speeding.  I also already carry the kids’ birth certificates in a binder because we go to Canada frequently.  I even keep their shot records, our car’s registration, and other documents in it because it’s so convenient.  When we were students there, I kept the visas in the same binder.  And I have NEVER been offended when a Canadian officer has asked to see my documents at the border – it’s their right.

The only ones that should be upset by it are those that are here illegally. (So, Obama, why are you upset?)

Arizona has every right to protect its citizens.  Everyone that has seriously read SB 1070 has been forced to realize that it is definitely constitutional.  Even Eric Holder and his crew haven’t been able to justify a reason to fight it.  That’s why they are sitting on it, claiming that they are going to go slowly in order to mull it over.  As near as many of us can tell, they are sitting on it until the law takes effect in the hopes of catching an Arizona police officer attempting to use it to commit a crime.

I don’t understand how they think that will help their argument against the SB 1070, though.  People commit crimes. That’s why we have laws.  Laws that are thought out and well written don’t cause crime, they address them.  And SB 1070 is a law written – apparently very well – to address and deal with crime being committed by people of every heritage, size, and contortion, even if the impetus was about Mexican citizens.

I certainly pray that the federal government, in their present silliness, doesn’t attempt to set up an entrapment, and that Arizona is left alone to work out the law as they need to.

Now, Honorable Mayor Villaraigosa, as far as your boycott is concerned, according to the CATO institute,

“Preventing such interstate discrimination was, of course, one of the original purposes of the Constitution and, specifically, its Commerce Clause (which grants Congress the power to regulate interstate commerce).”

It’s one thing for an entity to suggest individual citizens boycott an offending entity. It’s another thing when a government passes a law forcing a Boycott of interstate commerce.  Your boycott, sir, is what is unconstitutional.

So – as much as I love driving Highway 1, visiting the Pier, Universal Studios, relatives in Santa Monica, the Sequoia forest to the north, and much more…I will NOT visit LA or California at all until California officials grow up and cease their foolish attack on Arizona.

By the way – at one point, the Canadian government turned down out request to extend our visas.  We had apparently filled out our paperwork wrong.  Although we disagreed with their assertion, We did not protest or demand an imagined right to stay.  We left, as we were told.  We camped in Glacier Park and returned to the border to do the paperwork again.  This time the visas were granted.  Yes, it cost me another $1200, but we did it and it was legal.  Although we are a multi-racial family, we never accused Canadian officials of racism.  Canada has the right to govern its borders, and so do “we” in the US.

Please remember, Mayor Villaraigosa, as well as President Obama; it’s “We the People” that run this country.  Not a political party, and not a self-important person.