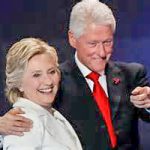 Support for President Trump is growing now that people see his policies are working. He meant what he said on the campaign trail; it wasn’t just the usual rhetoric we had become used to. But Hillary, apparently feeling angry and entitled, still doesn’t get it. Almost a year and a half after the polls closed, this woman is still convinced that most Americans want her as president – but nefarious forces prevented them from electing her.  In her most recent edict, she told an audience in India that most American women – the very group she claims to represent – are under control of men.  According to Hillary, most American women will do what they are told when alone in a private voting booth.

While Hillary obviously won California by a landslide – (if all the votes in the LA area were legal) – she still only won 48% of the vote. Most states voted against her. With that LA vote factored in, Trump won 46%. The balance went to 3rd party candidates.

Even with LA factored in and assumed legal – it still means 52% of Americans did NOT vote for Clinton. Therefore, her “Popular Vote” doesn’t make her much more “popular” than Trump. Both garnered votes from citizens who felt they were merely the lesser of two evils. However, with increasing evidence that the DNC, media and FBI manipulated the election, more Americans are relieved Hillary isn’t president.

America is fed up with manipulation and demeaning comments from the DNC, media, and Hollywood as well.

But the distaste for Hillary doesn’t stop with Hillary. Voters are realizing that Hillary Clinton exemplifies the persona of the DNC. She says the belittling things she says because that is the attitude she and her DNC peers have long had. She is the epitome of the upper-class elitism that pervades the Democratic Party, the east coast media, and Hollywood. They truly believe they are better than everyone else.

The coastal elite have been looking down on main street Americans of every heritage and treating them as chattel for years. Many Americans are finally realizing that the policies, values and mores of the left’s upper class have been nurturing and exasperating racism all along. But while it has been rife with racism almost from inception, most of today’s middle and lower-class Democrats never realized that this was what they had been supporting.

This is not my mother’s Democratic Party. She and her friends were good people who supported policies they believed would benefit everyone. They did not support racism – nor ‘classism,’ nor identity politics of any kind. Further, the corruption that has grown in the DNC over the last thirty years is something most members were unaware of.

SHAME on ALL Democratic officials who continue to support the DNC with its deep corruption, elitist attitude, and destructive policies. Take a genuine stand and denounce all those who have been involved in the fraud – in every branch and agency.

To American voters: Considering all that has been learned over the last year – let your elected officials of both parties know how you honestly feel.  Insist they don’t leave a Town Hall without explaining how they will stop corruption in government and the election process.