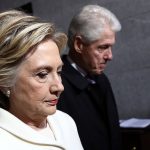 (Courtesy of the Washington Times)

1. Monica Lewinsky: Led to only the second president in American history to be impeached.

2. Benghazi: Four Americans killed, an entire system of weak diplomatic security uncloaked, and the credibility of a president and his secretary of state damaged.

6. Travelgate: The firing of the career travel office was the very first crony capitalism scandal of the Clinton era.

8. Pardongate: The first time donations were ever connected as possible motives for presidential pardons.

9. Foundation favors: Revealing evidence that the Clinton Foundation was a pay-to-play back door to the State Department, and an open checkbook for foreigners to curry favor.

11. Filegate: The Clinton use of FBI files to dig for dirt on their enemies.

13. The Waco tragedy: One of the most lethal exercises of police power in American history.

14. The Clinton’s Swedish slush fund: $26 million collected overseas with little accountability and lots of questions about whether contributors got a pass on Iran sanctions.

16. Gennifer Flowers: The tale that catapulted a supermarket tabloid into the big time.

17. Bill’s Golden Tongue: His and her speech fees shocked the American public.

19. Larry Lawrence: How did a fat cat donor get buried in Arlington National Cemetery without war experience?

21. Chinagate: Nuclear secrets go to China on her husband’s watch.