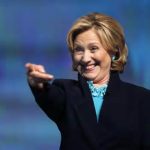 Hillary Clinton has been campaigning since 2008 as “the first woman president.”  She has inferred she can not only do just as good a job as any male candidate, but because she’s been both Senator and Secretary of State, she can do a better job than any other candidate.

On the one hand, she wants people to believe she is the woman to prove ‘women can do anything.’  “I am woman, hear me roar.”

On the other hand, she wants people to think her husband will be her co-president  – and told one group that Bill will handle the economy for her because “he is good at that kind of thing.”

So is she capable of running the country on her own, or isn’t she?

She expects all women to rally around her, and former Secretary of State Madeleine Albright has said any woman who doesn’t help her win can go to hell. …(or, in her more polite language, ‘there is a special place in hell’ for them.)

Yet on Sunday, May 15, she told a crowd in Kentucky “I will put my husband in charge of revitalizing the economy ’cause he knows what he’s doing.”

So…what is she saying – that she doesn’t know what she is doing?

This will be the first President in American history to hand over a major part of the job over to her spouse.  Will the First Husband end up managing all Affairs of State, while Hillary attends State dinners and funerals?  (Well… if that is all she needs to do, then she is qualified… because that is all she did as SOS).

…or…maybe she is playing the good wife’ – stepping aside and letting her husband take the lead as so many women her age have done through the years.

Either way…what kind of example is that for the daughters of feminists?

…Perhaps feminists will say to their daughters, “Don’t worry dear, this was just a baby step.  She is elderly and kind of stuck in old ruts. We’ll have a better candidate next time.”

Come on people. This candidate has just admitted she isn’t up for the job. There are term limits for a reason – and Bill Clinton has already had his turn as president.  I, for one, am not interested in electing Bill Clinton to a third term through the faux candidacy of his wife.

When we elect a woman president, it will be a woman who can hold her own and be a role model for our children.

And not only hold her own, but be a person of honesty, integrity, and humility. There are a lot of people to choose from with intelligence, skills and character.  We do not have to settle for Hillary Clinton.