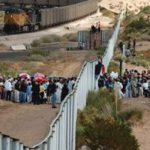 Jose Antonio Vargas, a Pulitzer Prize-winning journalist who recently resigned his position after admitting he was an illegal immigrant and had been hiding the fact since he was 16-years-old, sent me an email today.   In his email he asked me to sign a petition.

He said, “More than 6,000 … from all over the country have joined me in calling for a new national conversation on immigration — and I’m bringing all of their voices with me when I go on the Colbert Report… Would you add your name now, so I have a huge number to announce on the show?”

He said that three weeks ago, he had “published an exposé in the New York Times” about his life story: coming to this country as a boy, learning English, and embracing America.

He says that he quit his job because he was tired of remaining silent and now wants to “strike up a more civil, inclusive debate about immigration.”

Does he really? Does having a more “civil” debate honestly mean being open to what I have to say and considering it?

Jose Antonio Vargas –  No, you can not add my name to your list of supporters. But I do agree that we need a national conversation on immigration – an honest one.

You say your story is “the tale of a hard-working immigrant who defines the American dream: achieving success against great odds, working hard, and even earning a Pulitzer Prize” for reporting.  You go on, “Still, despite everything I’ve achieved, the law still says I am not technically an American. I am undocumented.”

But I say your story is one of a series of liberal, dishonest mentors assisting you in hiding from the laws of this country – rather than doing the right thing and help you become legally documented.

You ask Americans: “What would you do if you found out at age 16 that you didn’t have the right papers?” and say that as a journalist, your job is to ask questions that spark conversation.

Here is my answer. I would do just as I did in Canada when the visa’s for my entire family ran out and we were denied new visa’s in Calgary. We left the country and did not re-enter until we had valid visa’s again.

This is the kind of honesty that my mother taught me, and it is what I – a widow – taught my nine children to do.

Yes, I had children who cried about leaving the college campus we had been living on for five years. My youngest daughter, age ten, curled up in a ball on her bed and wept. My husband – her father – had died of cancer only a year earlier. The campus had been a place of stability, love and safety during a very difficult time of their lives, and now I, a widow with little resources and no home in the states, had to pack them up and leave with no promise that we would be able to come back.

But the law in Canada is just as valid as in the United States. We had no right to be there after our visa’s ran out. I taught my children to obey the law, and then I taught them to be strong, not fear, and take the proper steps to become documented again.

That is what the “mentors” that “helped you” avoid the law should have done for you. Are you open to that part of the “conversation?”

The next time our visa’s ran out, in 2007, we accepted it and moved back to the States.  Five of my children enrolled in a U.S. public school for the first time.  All missed their friends back in Alberta