Government » Mrs. Obama, what is Racism? 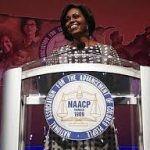 First Lady Obama, speaking at NAACP in July, on the eve of their declaring the Tea Party racist, stated,

“…just like so many other challenges that we face as a nation, the African American community is being hit even harder by this issue.”

If she is right, whose fault is it?  How does she propose to fix the ‘issue?’  Will more stimulus funds solve it?

If so, will the funds be targeted at only those served by the NAACP, or will children of other heritages, who Mrs. Obama doesn’t appear to be as concerned about, also benefit?

Mrs. Obama went on to say that if the ‘issue’ of childhood obesity within the ‘African American’ community isn’t resolved, ‘African American’ children “won’t be in any shape to continue the work begun by the founders of this great organization.”  (the NAACP)

And what is that work? Please tell the rest of us, because for years we’ve been lead to believe that the NAACP was a civil rights organization with an altruistic heart for equality of all people.  It sure doesn’t seem that this is the case, anymore.  Maybe it never was.

Lastly, why does Mrs. Obama, the NAACP, and their followers continue to call American citizens of darker skin “African” Americans?  Why is there a continual, purposeful pointing out of centuries old heritage?

I have never been referred to as a “German American.” …Or an “Irish American,” or “Scottish American,” for that matter. (My, my, which one would I choose?)

OH WAIT!  Africa is a continent.  Therefore, I would be called a “European” American.  And by the way – are ONLY people of dark skin who are of African heritage allowed in the NAACP?  What if they have European heritage as well?

Oh, wait, President Obama has more than one heritage.  So…is he considered “African” American or…”European” American, …or both?

Excuse me, but who here are the people most focused on “race” here… aka  – the true racists?