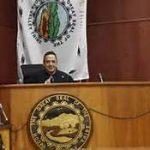 On February 12, 2013, a horrid violence against women was committed when the ‘Violence against Women Act’ was passed by the U.S. Senate by a 78-22 vote with all amendments intact. Women across the nation were thrown under a bus.

On February 28, 2013, the U.S. House repeated the violence with 87 Republicans joining 199 Democrats to pass the bill 286-138. God only knows if this callous assault on women can be stopped. The measure now heads to Obama’s desk.

Obama said in a statement. “Renewing this bill is an important step towards making sure no one in America is forced to live in fear, and I look forward to signing it into law as soon as it hits my desk.”

Does no one actually read these things? We are discussing women and young girls who have been vulnerable and already victimized – being forced into further victimization. Where is the language in the VAWA that tribal government can only have jurisdiction under informed consent and absent objection of the victim?

I asked this question to both Ms. Tracee Sutton and Ms. Gail Hand from Senator Heitkamp’s office. Both were silent in response.

I understand that most of our Congressmen on the Hill have never been in the situation of being a victim within Indian Country. I understand that they might not be aware the ramifications these amendments will have on tribal and non-tribal women. Reading the recent report by Mr. Thomas F. Sullivan, Administration of Children and Families in Denver of the severe corruption and abuse on the Spirit Lake Reservation might shed some light on the problem. If even a portion of what he is saying is true, our Congress has no right for mandating tribal jurisdiction over U.S. citizens.

Never assume that simply because a woman is of tribal heritage, she wants her case to be heard in tribal court. A person does not know the meaning of “Good ol’ Boy’s Club” until one has dealt with some of the tribal courts. On top of this, our government has given all tribal courts full faith and credit, meaning once the case is ruled on in tribal court, the victim can’t go to the county or state for justice.

And while many enrolled women will be upset when told their options have been limited, please realize that multi-racial marriages and relationships are very, very common in Indian Country and non-member women are no small number in domestic violence cases within reservation boundaries.

Further, it is interesting that in the language in section 4(A) below, describing under what conditions in which there would be an exception to tribal jurisdiction, the defendant is addressed more than the victim. It doesn’t matter what heritage the woman is – that isn’t the deciding factor for tribal jurisdiction. The language below addresses the perp’s relationship to Indian Country as the deciding factor.

In fact, under this section, ‘victim’ is defined and limited to only women who have obtained a protective order. In other words, women who DON’T have a protective order would NOT be considered victims under the exception section, and thus, no matter what, are subject to tribal jurisdiction.

FURTHER – the words, “in the Indian country of the participating tribe” are used over and over. Do you know what this means? I will tell you what it doesn’t mean. It DOESN’T mean inside reservation boundaries. But I can’t tell you what it DOES mean as far as how many miles outside the boundaries it extends – because, apparently, that is up the tribal government and BIA.

Yes, friends. A woman, off the reservation, who is assaulted by a person whom she might not even be aware is a tribal member (we talked about multi-heritage relationships, right?) might find herself fighting for justice in a tribal court.

… But trying to read the legalese in section 4, I have to ask, if both the victim and perp are non-Indians, but the victim doesn’t have a protective order…? (Who writes this stuff?)

It appears that the language has been written to protect the defendants, specifically enrolled men, from state and federal jurisdiction. They might come down hard on a non-member, but given the track history of many tribal courts – do not doubt that this bill will end up protecting certain men and further victimizing many women.

This type of language throws women of all heritages under the bus. Not only could enrolled women be forced into a court predominantly run by her ex’s relatives, but non-tribal women, viewed as outsiders no matter how long they have lived in ‘Indian Country’, could be forced to share their horrific story and plea for justice in a room full of potentially hostile relatives and friends of the defendant.

How many women will simply suffer in silence rather than attempt to be heard in tribal court? How do laws like this seriously protect an already victimized woman? What can be done to ensure that victims know they have the option to refuse tribal jurisdiction and seek justice elsewhere?

Further – could you please tell me in what manner women who would be affected by these amendments were consulted? During the discussion of these amendments, what non-tribal entity or organization represented and advocated for needs of women who live within Indian Country?

PLEASE URGE PRESIDENT OBAMA NOT TO SIGN THIS HORRIBLE VERSION OF THE VAWA!

`(A) VICTIM AND DEFENDANT ARE BOTH NON-INDIANS-

`(i) IN GENERAL- A participating tribe may not exercise special domestic violence criminal jurisdiction over an alleged offense if neither the defendant nor the alleged victim is an Indian.

`(ii) DEFINITION OF VICTIM- In this subparagraph and with respect to a criminal proceeding in which a participating tribe exercises special domestic violence criminal jurisdiction based on a violation of a protection order, the term `victim’ means a person specifically protected by a protection order that the defendant allegedly violated.

`(i) resides in the Indian country of the participating tribe;

`(ii) is employed in the Indian country of the participating tribe; or

`(iii) is a spouse, intimate partner, or dating partner of–

`(I) a member of the participating tribe; or

`(II) an Indian who resides in the Indian country of the participating tribe.