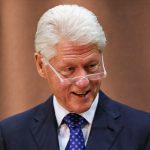 It was Bill Clinton’s 1993 tax plan that allowed Donald Trump to claim his Altantic City losses and not pay taxes. Honesty would have Bill Clinton stepping up three months ago and owning the law.

From a DNC staffer’s email –

I know very little about this, but from a quick sweep it looks like passive-loss relief was a core component of Bill Clinton’s 1993 tax plan:

Chicago Sun-Times: Last year, Bentsen’s Senate Finance Committee approved a change in the passive-loss system designed to provide partial tax-relief to property owners – and new buyers – who are “active participants” in real estate trades or businesses. Basically, the plan allowed such owners to escape the clutches of passive-loss treatment, and to write off losses from their real estate against net income derived from real estate. Guess what ended up in Bill Clinton’s tax package? You got it: The very passive-loss relief plan that sailed through Bentsen’s committee.

Though President Clinton’s economic ideas have drawn a lot of fire from Wall Street, his plan could well be a boon to the business of banks, brokers and other financial-services industries. In the eyes of some of his critics on the Street, Clinton has presented himself as a Robin Hood intent on redistributing wealth according to a system of “fairness” that is open to dispute. At the same time, however, observers say there is a very real prospect that his proposals could lead to greater demand for a wide variety of Wall Street’s merchandise, from municipal bonds to individual retirement accounts. “Everyone’s got a bellyache about Clinton’s proposal,” observed Ethan Siegel, a Washington analyst at Prudential Securities.

“While the market mulls over the proposal and its likely impact on the economy, I’d point out that there are pluses in the package that cannot be ignored.

“The overall message remains that there is going to be less Washington money for high-income retirees – in both pension and health care benefits. As more and more people find it necessary to provide for their own retirements, this will be a plus for the mutual funds, the financial planners and the banks.”

Analysts like Siegel raise these visions at a time when expectations for financial businesses are already on the rise. As of late last week, Standard & Poor’s index of financial stocks sported a 23.31 percent gain over the past 12 months. That stood in sharp contrast to an advance of just 3.08 percent for S&P’s index of industrial stocks, and a 6.88 percent rise overall for S&P’s 500-stock composite index. The financial group’s performance reflects the fact that financial firms of many types have been recovering from the early-1990s credit crunch, and reviving their profitability, with help from falling interest rates. As many analysts see it, these businesses also stand to benefit from demographic forces as the nation’s population ages in the years ahead, dramatically increasing the size of the over-40 set. This is the group that has always provided many of Wall Street’s best customers.

Richard Hoffman, chief investment strategist at Cowen & Co., cites as a primary market theme of the ’90s “anything that 40-year-olds and above buy and use.” Wall Street is already well into a prolonged marketing blitz seeking to woo this horde of potential clients as it faces the need to prepare in earnest for its retirement years.

Clinton’s proposals already have touched off a boom in the tax-exempt municipal bond business, based on the likelihood of higher tax brackets for upper-income individuals and couples. By the same reasoning, people’s appetites would stand to be whetted as well for annuities, life insurance, and retirement savings vehicles like IRAs, Keogh plans and employer-sponsored 401(k) plans – all of which offer some degree of shelter from taxes. Siegel says ripple effects will likely reach other investment markets as well.

Many Wall Streeters object to Clinton’s expressed faith in government, rather than private industry and market forces, as a driving force behind change and progress. From another angle, however, says Rao Chalasani at Kemper Securities in Chicago, “the president called for turning to investment, away from consumption.”

Real estate owners, investors and brokers could emerge from the 1993 federal legislative sweepstakes with something they haven’t seen since 1981: A tax bill that giveth rather than taketh away. Compared with other key sectors of the economy that were asked to share the pain of deficit-reduction, real estate came out as a net winner in the Clinton administration’s economic recovery program unveiled last week. Not a big winner, to be sure; but not a loser by any stretch.

First, the Clinton administration posted a last-minute hands-off sign on two of the fattest, and most politically sensitive, potential sources of new tax revenue: deductions for home mortgage interest and local property-tax payments. Plans for limiting both were on the table until late in the budget-crafting process, according to administration sources. One official said key staff members favored at least modest cuts in the deductions for philosophical as well as revenue-raising reasons.

Second, the fingerprints of pro-real estate legislators like former Sen. Lloyd Bentsen (D-Texas), now secretary of the Treasury, are clear in the Clinton package. While chairman of the Senate Finance Committee, Bentsen supported efforts to encourage pension funds to put more of their money into housing and real estate. The Clinton plan includes precisely such a plank. Bentsen also supported efforts to roll back features of the Tax Reform Act of 1986 that severely penalized new investment in commercial real estate. Those provisions hampered resales of office buildings, apartment complexes and other property financed by failed S & Ls, which were glutting the market in his home state.

Among the biggest impediments to real estate investment: the controversial “passive loss” system created by the 1986 reform act. That law defined all forms of rental real estate as “passive” activities, no matter how much time and effort owners spend on managing or operating their real estate. Under the law, losses generated by passive activities cannot be deducted against ordinary income from other, active sources. Instead they can only be written off against income generated by other passive activities. If there is no passive income available to a taxpayer, the 1986 reform law required the losses to be “carried forward” – put on ice until the property is sold or the taxpayer generates net passive income to offset the frozen passive losses.

Last year, Bentsen’s Senate Finance Committee approved a change in the passive-loss system designed to provide partial tax-relief to property owners – and new buyers – who are “active participants” in real estate trades or businesses. Basically, the plan allowed such owners to escape the clutches of passive-loss treatment, and to write off losses from their real estate against net income derived from real estate.

Guess what ended up in Bill Clinton’s tax package? You got it: The very passive-loss relief plan that sailed through Bentsen’s committee. But that’s just part of the new tax plan’s lean toward real estate. Consider these other features: Permanent reauthorization of the two most important sources of financing for affordable housing. These are the low-income tax credit for subsidizing rental units, and the mortgage revenue bond program that provides cut-rate mortgage money for more than 100,000 modest-income first-time home buyers per year.

Both programs have expired periodically when Congress failed to approve annual or biannual tax bill reauthorizations. A rollback of the 1992 federal tax bill’s proposed depreciation standards for commercial real estate. The Clinton plan calls for a 36-year depreciation schedule for non-residential property. While that’s up from the 31.5-year schedule included in the current tax code, it’s four years below the 40-year standard contained in the 1992 tax legislation, which was vetoed by President Bush.

Commercial real estate lobbyists would have preferred no change at all, but even last year they accepted the 40-year standard as a necessary revenue-raiser in exchange for passive-loss relief. The Clinton package turns out to be kinder and gentler to real estate, in other words, even when it passes the hat looking for more tax dollars.

Brinster – do we have any boomerang here?

These are the specifics on 78/79. As long as Brinster doesn’t see a flag, then I’d like to round all of this up in a doc, but tighten up the frame a bit and make sure we’re driving the “Trump’s always in it for himself” narrative. That should help downplay his call for higher taxes on the wealthy (non-real estate) folks.

Trump Paid No Taxes Due to Losses on Rental Properties. A Division of Gaming Enforcement report from October 1981 stated: “The Division notes that in 1978 and 1979 Trump incurred no federal income tax liability. In 1979, the lack of such liability is primarily attributable to losses incurred by Trump in the operation of rental properties located at Third Avenue, Fifth Avenue, East 56th Street, East 57th Street, East 6lst Street and East 62nd Street, New York City, New York. The expenses for the operation of the aforesaid rental properties were actual cash disbursements as reflected in Trump’s cash disbursements journal. The foregoing losses were also traced to interest due on amounts owed to Fred C. Trump and Chase Manhattan Bank during 1978 and 1979. Additionally, Trump incurred losses during 1978 and 1979 in the operations of the Park Briar Associates, Regency-Lexington Partners and 220 Prospect Street Company, partnerships in which Trump has an interest.” [Division of Gaming Enforcement Report to the Casino Control Commission, 10/16/81]