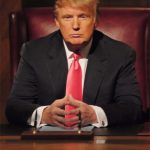 I will continue to refer to our elected Commander-in-Chief as President Donald J. Trump. I will refer to the person currently sitting in the office as Joe Biden, and his running mate as Kamala Harris – with no titles – because neither currently holds elected office.

That is, obviously, a very mild form of Civil Disobedience. But under the current vindictive and threatening environment – it is the safest act I can perform. But even a mild stand such as this, in the current environment, can bring a person trouble – as any suggestion the election was stolen is grounds for punishment.

Constitutionally, Congress had no choice but to certify the state’s election results. Nevertheless, that does not make Joe Biden the elected president. If President Trump in fact received the votes necessary to win the individual states – then he is, in fact, the elected president. Based on the sworn, eye-witness testimony of hundreds of poll workers and poll watchers from November 3rd on – testimony the main stream media purposefully ignored and did not allow the general public to see – there is more than enough evidence that “irregularities,” if not outright fraud, took place.

This is the evidence that several states and federal legislators were acting upon when they protested the election. These legislators are now being vilified for acting upon the evidence they were shown. They are being punished for believing and standing up for their constituents – some of whom showed documented evidence.

NO, Joe Biden – there can be no unity with this. Not ever.

Please read the opinion of constitutional authority and Senior Advisor to the Convention of States, Rob Natelson1, on the issue:

AND – here is another article Natelson wrote on the subject, in question and answer format:

Q&A for state legislators and citizens: The Constitution and how to settle the election

Irregularities in the presidential election returns of six states have sparked the question “What next?” The states are Arizona, Georgia, Michigan, Nevada, Pennsylvania, and Wisconsin.

Should their state legislatures intervene? Confusing the issue are media and other claims that are dead wrong.

This column corrects the mistakes and clarifies duties and options.

Why the mistakes? Many in the media are strongly motivated to secure the election of Joe Biden—or, more accurately, the defeat of Donald Trump. They have been uncurious about alleged election irregularities or how the Constitution and federal law address presidential election deadlocks.

Now some questions and answers:

Q. How is that relevant to presidential elections?

A. The Constitution gives state legislatures power to determine how electors are appointed. This power was reaffirmed by the Supreme Court this year in Chiafolo v. Washington (pdf). The Court held that state legislatures not only control choice of electors but can even direct them how to vote.

Q. Are there roles for Congress in the presidential election system?

A. Yes. One is that the Constitution’s Same Day Clause or Presidential Vote Clause (Art. II, Sec. 1, cl. 4) authorizes Congress to select a uniform national day for voting by presidential electors and a (necessarily uniform) national time for voting for president electors. Congress has responded with legislation whose current version was enacted in 1948: December 14 for voting by electors (3 U.S. Code §7) and November 3 for voting for electors (id., §1).

Q. But this year many people voted by mail and the balloting continued over weeks . . .

Q. So, where does the state legislature come in?

A. Federal law, 3 U.S.C., § 2, recognizes state legislatures’ continuing power to choose electors after November 3 if the election on that date fails. It reads:

“Whenever any State has held an election for the purpose of choosing electors, and has failed to make a choice on the day prescribed by law, the electors may be appointed on a subsequent day in such a manner as the legislature of such State may direct.”

Q. Is that relevant to all states this year?

A. No—only to the six states with contested elections. Investigations over the next few weeks may show that preliminary results in some of these states are accurate. Then the law will apply only to states (if any) where the results remain helplessly muddled.

Q. How do lawmakers learn if claims of irregularities are true?

A. They should see how the lawsuits challenging the election unfold in their states over the next few days and weeks. I also recommend that legislative committees hold hearings of their own.

Q. To overturn an election, do you have to show fraud?

A. No. Any irregularities altering the results may be sufficient. These include (1) election officials treating different votes in different ways, in violation of the 14th amendment (Bush v. Gore, pdf), (2) changing election procedures during or after the election—or before the election in a way that confuses voters, and (3) even innocent mistakes, including software or machine errors.

Q. I read an article saying that fraud is sufficient to upend an election, and that there is no need to show it changed the result. Is this correct?

A. No. A court is unlikely to set an election aside if the results would have been the same anyway.

Q. If a state legislature finds that the results are hopelessly muddled, what should it do?

A. The principal options are (1) call a special election limited to presidential electors only or (2) choose the electors itself. Some may gripe about a quick election repeat, but successive elections are common in some other democratic countries.

Q. Is it true that only the governor may call the legislature into special session?

A. It is true in some states. Of course, this is no problem if the governor is cooperative. Some state constitutions allow a petition signed by a certain number of lawmakers to call a special session.

Q. My state’s law says only the people, not the legislature, can choose electors. State law further requires a 60-day notice period before a special election. Doesn’t this prevent our state lawmakers from acting even if federal law would seem to authorize them to do so?

A. No. If the legislature can come into session it may—either with gubernatorial cooperation or by a veto-proof majority—change the laws as necessary and allow the people to vote.

Q. What if the governor is not cooperative and there is no veto-proof majority?

A. Then the legislature may call itself into session and choose the electors itself.

A. This is one of those things not taught in law school. Here’s the background:

The Constitution delegates power to federal departments and officials. But it also assigns responsibilities to persons and entities outside the federal government. These persons and entities include state governors, presidential electors, convention delegates, voters, jurors—and state legislatures. The courts refer to the exercise of these responsibilities as “federal functions.” (See my forthcoming article on the subject in the University of Pennsylvania Journal of Constitutional Law.)

When the Constitution assigns responsibility to the “state legislature,” it may mean either the state’s entire legislative apparatus, including the governor, or the representative assembly standing alone, without the governor.

A. The Constitution gives state legislatures power to regulate federal elections. In this case, the delegation is to the entire legislative process including the governor. Ariz. State Legislature v. Ariz. Independent Redistricting Comm’n. (pdf). But when state legislatures act in the constitutional amendment process or elect functionaries themselves, they act alone, without gubernatorial involvement.

A. Before the 17th amendment, the state legislatures elected U.S. Senators, and the governor had no say in the matter. Choice of presidential electors is almost certainly subject to the same rule. Federal law seems to recognize this when it provides, “Whenever any State has held an election for the purpose of choosing electors, and has failed to make a choice on the day prescribed by law, the electors may be appointed . . . in such a manner as the legislature of such State may direct.” Surely Congress did not expect the legislature to go through the entire law-making process in a constricted period of time. It contemplated the legislature choosing the electors itself or setting up an expedited process.

Q. Okay, but if the state constitution says only the governor can call a special session, how can the legislature call itself into session?

A. When a state legislature exercises a “federal function,” its power comes directly from the U.S. Constitution, and it is not bound by state rules. The judiciary has said this repeatedly. The leading case is the Supreme Court decision in Leser v. Garnett (pdf), written by the celebrated justice, Louis Brandeis.

Q. Of the six contested states, all but Nevada have Republican-controlled legislatures. I’ve heard it suggested that they not choose electors at all. That way, neither Trump nor Biden will have 270 electors (a majority of the whole number of 538), forcing a run-off election in the House of Representatives. Although the Democrats will have a slim majority in the new House, the GOP will hold a majority of state delegations. Since presidential voting in the House is by state, it will elect Trump.

A. The suggestion is unwise. First, state lawmakers would, justifiably, take at least as much political heat for simply punting as for calling a new election or choosing the electors.

Second, the 12th amendment says that only if no presidential candidate receives “a majority of the whole number of Electors appointed” does the election go to the House. If none of the five contested states with Republican legislatures appoints electors, then there will be only 465 “Electors appointed.” If, as is almost certain, Nevada goes for Biden, then that would give him 233 votes—a majority of 465. No House run-off.

If fewer than five Republican legislatures abstain, then Biden will win the remaining states, and with them the Presidency.

Q. So what should state lawmakers do in Arizona, Georgia, Michigan, Nevada, Pennsylvania, and Wisconsin?

A. Ignore the media gaslighting and exercise their constitutional responsibilities. Monitor the state election challenges closely. If no clear winner appears in, say, two more weeks, then either call a snap election using old-fashioned paper ballots in fixed polling locations or, if the governor does not cooperate, call themselves into session and choose the state’s presidential electors. In the latter case, lawmakers can blame it all on the uncooperative governor. Remember that the process has to be complete before the electors meet on December 14.

This column first appeared in the Epoch Times.

Elizabeth Morris is the administrator of the ‘Christian Alliance for Indian Child Welfare’ – a national non-profit she and her husband, a member of the Minnesota Chippewa tribe, founded in 2004.  Ms. Morris has been writing, lobbying, and advocating on issues related to federal Indian policy since 1995 and is currently working on her PhD in Public Policy: Social Policy.

Ms. Morris also earned a Bachelor of Arts in Christian Ministries; Associate of Science (Registered Nurse), a Diploma of Bible & Missions, and is the author of the book, ‘Dying in Indian Country.’