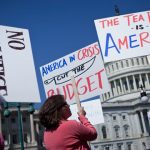 California Governor Arnold Schwarzenegger told Greta Van Susteren on Tuesday that he expects the tea party to “twinkle and disappear” as the economy improves.

Is he kidding? He obviously has no clue how people really feel and why. Will an improved economy change how we feel the The National Debt? Obamacare? How about the way Obamacare was forced on us? The corruption rampant in Congress? The buying and selling of votes?  The attitude the politically elite have had toward average Americans? The way the Obama administration have treated us? Excuse me?

What Gov. Schwarzenegger is exhibiting here is exactly the callous and tone deaf attitude that we are so angry about!

Schwarzenegger derided the tea party during the Van Susteren, complaining about what he thinks is lack of momentum and solutions.

He said, “People meet. They talk about it. What can we change? How? And it’s all healthy and it’s all good. But I’m just saying they’re not going anywhere with it because nobody is coming up and saying, Here’s our candidate, here’s our solution, here’s what we’re going to do, and have a whole policy debate over the various different issues. So this is why I think, in the end, when the economy comes back, I think that the tea party will disappear again. It will, you know, twinkle and disappear, and that will be it. So that’s exactly what I feel about it.”

Again, he’s obviously not listening. The Tea Party has suggested solutions on many various issues and has backed several candidates. And momentum? What do you call the feverish pitch with which the Tea Party has grown over the last year? What grass roots movement has he watched grow as quickly as this one, pulling such a diverse group of people from all over the country?

What he really doesn’t like, as evidenced in his confusion over why there is no policy platform, is the organizational structure of the Tea Party – or lack thereof.  He assumes that because it doesn’t look or function like a conventional political party, it must not be a real movement and can’t work.

Well. we’ll see about that.  The reason there isn’t a set platform is because the Tea Party’s are all individual, local bodies.  They don’t want anyone from afar defining them.  The reason for the grass root, local, loose organizational model is a direct result of the anger people are feeling toward the out-of-control and unaccountable leadership we’ve had from the Democrats and Republicans. Call it a knee jerk reaction.

And of course that very same leadership isn’t going to understand that. They want everything to continue as it had been – where they expect to get automatically reelected no matter how much they cheated and lied to their constituents.  They don’t want us standing up and telling them “No,” and they most definitely don’t want to lose control of our votes.  They want us to get back into our separate Democrat / Republican corners and stay there.  But we’ve been resilient to their efforts to mock and divide us.  Therefore, they fear the Tea Party, and want to see it fail.
Yes, there will be a change. That’s the whole point of the Tea Party. Our country has reached the point where we have to go one direction or the other. Fortunately, it will probably change in a good direction as it appears that most Americans want to return to a Constitutional Republic.

It’s just so sad that a third of America is still trying to control everyone else with the kinds of remarks and accusations they’ve bandied about; Not just Gov. Schwarzenegger, but the reigning leadership in DC, calling us a “Mob”, and accusing us of being violent and racist. Funny, we didn’t see Nancy Pelosi crying about the violence from leftist protesters in Arizona this last week. Or Bill Clinton, warning those protesters to behave themselves. In fact, I don’t think either of them said anything.

Of course they didn’t. Our out-of-control Political leaders tend to think that Liberal protesters are always justified in carrying through with their angst.

But conservative protesters better not even have a tinge of emotion in their voices. The conservatives are the ones that really scare them, even though the Tea Partiers have been anything but violent.

I think maybe our leaders have seen too many Hollywood movies – the ones that portray rural conservatives as idiots, racists, and murderers. That’s Hollywood for you.  Maybe our leaders should try to get to know some of us.  They might find out Hollywood was wrong.

But …I suppose it’s to be expected; in any historical situation, there is always a group that, for their own selfish reasons, opposes what is right and good. There’s no getting away from it.

I pray, in the name of Jesus, that we, the Tea Partiers, will stay strong – as well as nonviolent. I pray that we will be able to continue with the current structure of local control, open to all who want to join in support of constitutional law, as well as continuing to be mature in our communication with those we disagree with.

I pray for the healing of our country, and a return to the standards, morals, and ethics that once made it strong. I pray this in the name of Jesus. Amen.