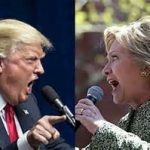 I used to react like Trump. Well, not quite as sharply as Trump responds… although …maybe I did and just didn’t think I did. Some people from back then thought of me as angry. I did get pretty catty sometimes.

This was back twenty years ago when lots of people read the letters to the editor. That was my first, main way of getting a political message out – before Facebook and Twitter.

‘Letters to the editor’ played best in small counties, where you were sure to get printed. Only trouble was that they were ‘weeklies’ – and a back and forth took a LOOONG time. Readers needed to have patience. ‘Word wars’ back then could take three or four weeks to play out in the weekly paper, as opposed to today, when Twitter or Facebook ‘word wars’ play out in just a couple hours.

That said … I understand how embarrassing it is when someone tries to shame you publicly – in my case, in front of the entire county. I understand Trump’s agonizing urge to strike back. I couldn’t ‘not’ respond. The attacks STUNG. They would keep me awake at night, with all my arguments running over and over through my head. Sometimes, unable to sleep, I would finally get out of bed and get my thoughts down on paper in the form of another letter to the editor. I never felt tired while writing – even if in the wee hours of the morning. I was energized by my thoughts and emotion. Further, writing is much easier in the quiet hours while the rest of the family is sleeping. – Once finished, I could finally feel tired and go to sleep.

One time someone said they saw me at a restaurant yelling at the restaurant owner – and that I got thrown out of the restaurant. How do you not respond to something as ridiculous as that? So I wrote angrily in the paper the next week “Tell me exactly what restaurant and the date it happened – because I want to go talk to that owner.”

The person responded the week after that – “well, it must have been someone else.” Sure. Because it never happened.

I was vindicated – but still upset because some people might have read the first week’s attack and never saw the third week’s back-track (sans apology, by the way.)

But a friend told me to stop responding to attacks.

… ‘WHAT? And let people get away with saying things like that?? If I don’t say something – people will think it was true!!’

He gently replied, “Sometimes your angry responses say more about you than they say about the other guy.” He added a piece of advice my mother used to always say as well: “Ignore them.” That advice never made sense to me when she said it – and still didn’t make sense to me from him.

It took me years to learn to ‘not’ respond – and to be at peace with not responding.

That said: I know I could get in trouble if I start responding to attacks on our political Facebook page, so I make decisions (again and again) to not even look at nasty comments. When opponents say things that are outright lies – they are deliberately baiting me – and I don’t need to play in to it. If someone wants to have a mature conversation or debate – that’s great. But I don’t need nonsense. They can spew it elsewhere.

I have also gotten good at simply ignoring the stuff they say about us elsewhere. Some of our supporters sometimes send me a link and say, “you should see what they are saying about you today.” Or “You need to go to this site and stick up for yourself.”

No – I don’t need to. I am extremely busy and don’t have any time to waste on garbage. The fact is, it wouldn’t make a bit of difference if I went to those sites and said anything. They aren’t saying these things because they are seeking truth. They are saying it to discredit and stop me. So they aren’t going to respond to polite correction with, “Oh! My bad! We see your point now. Sorry, won’t happen again.”
It is a waste of time to respond to blatant attacks and will only serve to aggravate and escalate the situation.

Therefore, I keep my eyes on my own work, not on them. It doesn’t matter what they do or say. The only thing that matters is that I steadfastly do the best work I can – with the utmost honesty and integrity.

ANYWAY. Trump felt shamed in front of the entire country the night of the first debate. I understand that. The advice I can give him is the same advice my mother gave.

“Ignore them.” Plain and simple.