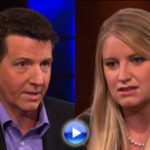 The REAL War on Women comes in the form of the Cherokee Nation’s affirmation that single mothers of ALL heritages MUST fear tribal interference if they give a child up for adoption without knowing for certain that the birth father doesn’t have EVEN ONE DROP of Cherokee blood.

In the Thursday, October 18, 2012, segment of Dr. Phil show, Cherokee Nation Attorney Christi Nemmo refused to admit 2-year old Veronica had only a drop of Cherokee blood, but she also doesn’t deny it. She doesn’t answer the question because she knows people would be horrified. She tries to make the argument that it’s not about how a child looks or how much blood the child has, but that they have a right to be part of the Cherokee tribe.

For example: Enrolled mothers at a home for unwed mothers in Bismarck told State Representative Lee Kaldor that they had wanted to give their babies up for adoption, but were afraid that tribal government would interfere. So although they honestly didn’t feel they were able to properly raise and nurture their babies, they felt that adoption wasn’t an option. Instead, some of them contemplated abortion. ( Interestingly, tribal governments don’t interfere in a mother’s decision to abort.)

Nemmo is also ignoring the rights of the Latino birth mother in question – and ANY mother who chooses adoption for their child.

The horrifying issue that is being ignored here is that while it’s bad enough that enrolled mothers don’t feel a freedom of choice in deciding what is best for their children, we also have a NON-Indian Mother, who was carrying a child with ONLY A TINY percentage of tribal heritage – and that mother and child’s wishes were tromped on by tribal gov’t.

What a nightmare for any pregnant single mother contemplating adoption – that some minute amount of heritage could give a government the legal right to interfere.

Lisa Morris is the Author of the new book, “Dying in Indian Country.” Purchase your copy at http://dyinginindiancountry.com/