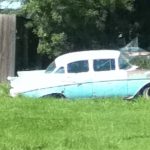 Although I drive a 1994 Suburban, I wasn’t planning on doing the  “Cash for Clunkers”. Gas guzzler that the Suburban is, it’s actually been nice for our size family, who are all too big to be sitting in the back seat of small five-seater cars anymore.  And I can carry and move things.

But even if I wanted to get a more fuel efficient minivan, I can’t afford to participate in  “Cash for Clunkers” program (more officially known as the CAR Allowance Rebate System or the Consumer Assistance to Recycle and Save Act of 2009.)

To participate, a person has to be buying a new car.  Sure you get up to $4500 in a rebate, but you still have to have quite a bit of actual money in order to afford a new car.  People of lower income don’t have the kind of money. But more importantly, because  “Cash for Clunkers” merely replaces your trade-in value, the benefit of the program isn’t as great as many anticipate, and for the American taxpayer, it’s another program that they can’t afford.  As nice as free money (ie: the rebate) sounds, American taxpayers can’t afford to be giving this money away.  And low-income people, most especially, can’t afford to be helping pay for any more bailouts.So I just figured I’d hang onto my car for another dozen or more years, until it becomes valuable as an antique, because there won’t be any other cars of this time period around.  Most will have been crushed.  Maybe we’d fix it up and drive it in the parades!

But here’s when I realized the AAIA is right.  Junk yards that crush the CARS program cars aren’t allowed to pull engines or certain other parts before they are crushed.  Earlier this month, I made use of a junk yard twice – once for a radiator and once for an engine.   I still need to put in an alternator.  Will certain parts for older cars become harder – and more expensive – to get?When all is said and done  –  “Cash for Clunkers” benefits New Car Dealerships primarily, by increasing sales, and the upper and middle class possibly, but giving them an extra few hundred dollars.  But it’s not good news at all for lower income people.   We can’t afford a new car, and we won’t be able to continue fixing our older cars at an affordable price, if we can find the parts at all.  This isn’t good.  In fact, the Obama administration knew they were taking away our options to keep our vehicles running.  They want our cars off the road, and they really don’t care how it affects those of us with very little money.   The little guy isn’t a priority.  Obama pretended to champion the little guy in order to get their vote, but it’s becoming more and more obvious that special interest – those that have received the bailout money and those industries he is choosing to socialize – are what he really champions.  Politics as usual.

I’ll bet many of the people that voted for Obama haven’t even thought of this particular ramification yet.  They’re still waiting for him to pay their mortgages and health insurance.  The  “Cash for Clunkers” program will be all done and over with, with most of the cars crushed, before the little guy realizes that the price of his used part just went up a whole lot.